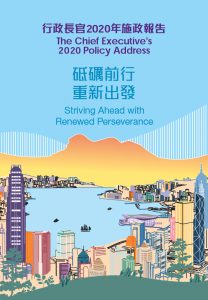 Question 1: Is there anything you find special about the Chief Executive’s 2020 Policy Address?

While it is a rather long piece of address which took the Chief Executive 2 hours to present, details for quite a number of issues are lacking. This is perhaps due to its political orientation. Terms like our nation, Mainland, Greater Bay Area, the Constitution and National Security Law are mentioned for more than 140 times.

Question 2: What do you think about the section on education in the Policy Address?

In the address, there are 11 paragraphs (about 2000 words) on education. The Chief Executive mentioned that ‘the 39 new initiatives announced since July 2017 have been completed or are progressing on schedule, and their progress has been set out in this year’s Policy Address Supplement’. However, not many details were listed. Neither was there any evidence-based self-evaluation on their implementation.

The section on education clearly reflected the Chief Executive’s political consideration and agenda. As the new measures will affect the education of Hong Kong and our younger generations who are promised with ‘Hong Kong’s political system and way of life remain unchanged for 50 years since 1997’, I cannot help asking whether the promised years have already been shortened.

Question 3: Why do you think that there is political consideration behind the Policy Address?

In the section on education, 4 out of the 11 paragraphs (Para 149-159) are related to social incidents, national education and Liberal Studies. This is especially evident in Para 153 in which the Chief Executive stated the controversy and ‘deviation’ of the subject Liberal Studies and ‘the direction of reform in future should focus on rectifying the previous deviation from the subject’s objectives, and reinstating it as the platform to help students establish a sound foundation of knowledge, make connection between the knowledge across different subjects, develop critical thinking skills, analyse contemporary issues in a rational manner and learn about the development of our nation, the Constitution, the Basic Law, the rule of law and so forth’. In her Press conference right after the release of the Policy Address, her first topic was on Liberal Studies, its rectification and the addition of new elements.

Question 4: What do you think of the proposed changes in Liberal Studies?

The Chief Executive mentioned that the controversy of the subject started from day one of its implementation. She further pointed out very clearly that ‘the social incidents last year led many to question again the effectiveness of Hong Kong’s education’, and thus that resulted in the necessity to rectify the situation through the ‘reform’ of the subject. However, it is much wondered whether this simple association is evidence-based. For instance, are students’ ‘undesirable’ behavior related to their grades in Liberal Studies? How about the participation of primary school students in the social incidents? There is no such a subject in their school curriculum! How can the proposed changes, the details of which are lacking at the moment, rectify the situation? How can measures such as the change in subject name, cutting of lesson hours, scrutiny of teaching materials etc. solve the problems as alleged? Are the proposed measures evidence-based or data-driven? Can the government be sure that these changes would really achieve their intended purposes?

In Para 154 which is under the heading of Liberal Studies, the Chief Executive mentioned that ‘a wrong question in the Hong Kong Diploma of Secondary Education Examination has generated heated discussions in the community’. Does she know that the question involved is in the History examination and not in Liberal Studies?

The Chief Executive mentioned that considerable resources have been put into education so as to create a favourable and stable environment and thus meeting teachers’ aspiration for a stable work and career development. Yet, the cutting of lesson time of Liberal Studies will inevitably result in surplus teachers. In this way, the government is actually re-creating old problems through the new initiatives.

We still remember that at the dawn of the education reform, many teachers embraced the proposal of Liberal Studies as a core subject and pursued special training in the subject. Ever since then, much effort has been put in the 6 modules with regard to the design in curriculum, pedagogy, and assessment. Now the government said that there were problems starting from day one. Is this fair to teachers? Why should teachers bear all the responsibilities?

The Chief Executive thought that the surplus teachers can be redeployed and assigned to teach other subjects. Then there comes the danger of not teaching a subject of one’s specialty and the risk of being de-registered as reflected in the recent cases.

Also, if the changes are to be implemented in September 2021 and details on the curriculum design, contents, teaching materials, the relationship of the subject with other core subjects are still lacking, the time schedule is actually not feasible. Principals and teachers need time to plan and take appropriate action. Wouldn’t it be better to have all supporting measures in place before the formal announcement and implementation of the changes?

With the proposed changes in public examination assessment for the subject from 7 levels to only 2, what would be the implications on university admission (both local and overseas) as well as the understanding of such a change by students, parents and prospective employers?

While the proposed changes are in fact giving way to Moral and National Education (Para 152), principals and teachers should be very alert of how to meet the new requirements.

Question 5:  What is your view on Moral and National Education?

In Para 152, the Chief Executive stated that ‘among the five domains of moral, intellectual, physical, social and aesthetic developments, moral development is regarded as the most important one and the foundation of education’. Actually, it is an inevitable duty of all teachers to foster student’s whole-person development. Yet, how to nurture students through value and moral education does matter. In face of the ever-changing social environment and the fast development of the internet world, educating our students will never be the same as in the past. We can no longer resort to some conventional modes such as rote learning, one-way delivery and dogmatic instillation. Students nowadays will not accept ‘hard sell’ of content matters.

Recently, the government has just announced “law-abidingness” and “empathy” as new core values for all local schools, and has directed primary and secondary institutions to strengthen the implementation of “values education” on campus. What does empathy really mean? If it means putting oneself into someone’s shoes, does the government have any empathy for those who will be implementing the initiatives and their students?

Does our government understand the need of our young people? Would it help for the government to just say that ‘we should not spoil our youths’?

In the Press Conference on 25 November 2020, the Chief Executive stated that she clearly saw the deep-rooted problems of Hong Kong in 5 areas which include difficulties in embracing “One Country, Two Systems”, nationalism, complicated social and political atmosphere and possible external forces influencing Hong Kong.

In face of all these complications and challenges, can the government really appreciate the challenges of teachers and their work? Does the government understand the pressure and uncertainties brought along by the National Security Law?

While our students are expected to be nurtured in areas as desired and proposed by the government, we should never forget the importance of nurturing in them social righteousness and equity, generosity, and self-reflection.

There are certainly some more issues related to the Chief Executive’s 2020 Policy Address I would like to share with you all, just to name a few as follows:

DO WATCH OUT FOR THE COMING ISSUES ON THESE TOPICS!